This type of marina catastrophe is one phone call every boat owner dreads. No one could have imagined the record snowfall that Maryland would receive this winter… or the damage it has caused.

On the weekend of February 6, Maryland received over 3 feet of snow. As if this record breaking snowfall wasn’t enough, only 3 days later another 2 feet of snow fell. The second storm brought mixed icy conditions, wind gusts up to 50 MPH and sustained winds of over 20 MPH. Maryland and surrounding states were shut down for days. 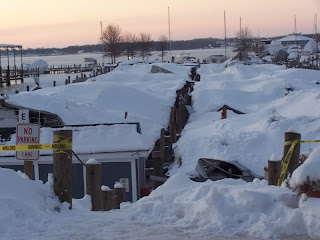 The accumulation of 72 inches of snow and ice was just too much for some boat sheds to handle.

Although I am sure there were even more, I know of two marinas located near my home marina on the eastern shore of Maryland that suffered great damage: Bohemia Bay Yacht Harbor on the Bohemia River and Georgetown Yacht Basin on the Sassafras River (all upper Chesapeake Bay marinas) At both marinas, the docks where the sheds collapsed were full of boats in the water for the winter. Many of these boats are over 50 feet and stay in the water over the winter because it is more convenient (and cost-effective) than getting pulled and shrink wrapped. Luckily no one was living on the boats at the time (as far as I know).

When the boat shed roofs collapsed, the weight of the snow and structure badly damaged the boats – many beyond repair. My understanding is this happened during low tide and when high tide came in the boats began to sink. At Bohemia Bay a reported 80 boats were either damaged or sunk while at Georgetown an estimated 14 boats were under the collapsed shed.

We can only hope that most boats were properly insured. But boat insurance doesn’t help to recover a classic boat that has been recently restored or the loss of personal items and memories from your boat. Many of the boaters will be completely out of commission for the upcoming boating season due to repairs. Other boaters will need to figure out if or how they can replace their boat.

The tragedy at these marinas makes you wonder about the safety of boat sheds. Many older shed structures are not up to today’s building codes and are badly in need of repair. The boat shed at Bohemia Bay Yacht Harbor is estimated to be nearly 30 years old, while the Georgetown Yacht Basin was estimated to be over 50 years old. Certainly neither shed was built to withstand the extreme weather conditions Maryland got this year. The damage was as bad as some hurricanes that have hit Florida or the Gulf Coast – if not worse.

Seems like every year weather conditions get more extreme – no matter where you dock your boat. We definitely need to expect the unexpected. 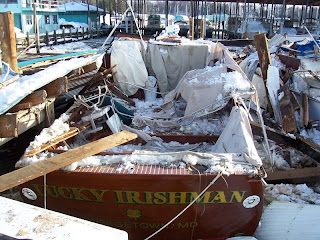 It’s very lucky that these old boat sheds didn’t give way during an extreme storm hitting in the middle of summer when boats are full of people at the docks.

Personally, I always wonder why people choose to dock their boat under a boat shed cover. Some people say that it keeps their boat more protected from the elements. That seems a bit debatable now.

Have you ever seen anything like this happen at a marina? Do you think there is anything that could have been done to prevent the collapse?