The Chesapeake Bay and the northern east coast of the U.S. rarely sees much damage with hurricanes or tropical storms, but boaters should still prepare their boats for strong winds and tidal surges from Hurricane Irene 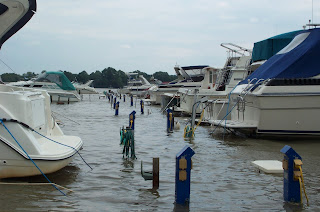 Ever since Hurricane Isabel caused huge tidal surges along the east coast and on the Chesapeake Bay in August 2003, boaters have had more reason to take precautions when hurricanes are predicted to come up the east coast.

The track of Hurricane Isabel took a direct course up the east coast and through the mouth of the Chesapeake Bay causing a once in a lifetime tidal surge that destroyed marina docks and sunk boats.

With Hurricane Irene (August 2011) predicted to follow a course up the eastern coast of the U.S., boaters should keep a close eye on weather predictions and plan to prepare their boats for the storm.

Here are some basic precautions boaters should take to prepare for a hurricane predicted to follow a course up the east coast and/or the Chesapeake Bay.

The MidAtlantic East Coast and Chesapeake Bay area has been upgraded from a high threat level to extreme as of 4:00 EST August 25, 2011.

The current path of Hurricane Irene (as of August 25, 2011) is projected to skim along the east coast just by the Chesapeake Bay. Hurricane Irene is on a similar path as Hurricane Earl in August 2010.

According to The Weather Channel, the current track remains west of the coast but can still shift up to 200 miles from the current track more inland. If Hurricane Irene shifts more inland the Chesapeake Bay will be more vulnerable. Hurricane force winds also extend 60 miles from the eye, so even if the path of Hurricane Irene is west of the Chesapeake Bay the bay is likely to experience very strong winds and tidal surges.

﻿ As of Sunday August 28, 2011 the Chesapeake Bay appears to have escaped the worst of this hurricane. Hurricane damage is reported as minimal and tidal surges did not peak over docks in most areas.

Boats docked on Sassafras River located on upper Chesapeake Bay appear to be fine. (photo taken at 9:30 am Sunday August 28)

Decide whether or not to haul out your boat ahead of the hurricane. The decision to have your boat hauled out of the water really depends on the path of the hurricane and the size of your boat. Most boaters want to avoid the inconvenience and expense of a haul out if they can. In August 2010 when Hurricane Earl was projected to hit the east coast many boaters pulled their boats unnecessarily. Large boats tied up well at docks are usually fine unless a direct path of the hurricane is predicted to hit a marina. Hurricanes rarely have direct hits to the Chesapeake Bay or northern parts of the east coast. But smaller, trailer boats should probably be pulled as a precaution because they can be impacted by high winds and rising tidal surges.

Prepare your boat for hurricanes with extra lines and fenders. Most marinas will suggest adding a few spring lines and fenders to protect a boat against high winds during a hurricane. But be sure to allow for extra high tidal surges with the lines. When the tidal surge from Hurricane Isabel hit the Chesapeake Bay we saw many boats get their stern pulled under the dock because the water went higher than the dock. 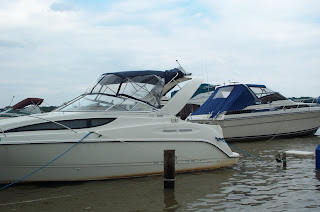 Secure or remove canvas from boats prior to hurricanes. A passing hurricane or tropical storm that does not make a direct hit (which is likely with Hurricane Irene) can still cause a lot of damage. Canvas can tear or blow off from hurricane force winds. Boats with canvas enclosures and biminis are at risk with high winds, so removing canvas and putting on a cockpit cover if you can is a good idea.

Prepare boats for expected power outages. The current path of Hurricane Irene is likely to cause high winds that will knock down trees and power lines. The Weather Channel is predicting that power outages are likely – for as long as 3 days. Its a good idea to empty and turn off boat refrigerators if docked at a marina. If the power goes out for an extended period of time refrigerators could drain boat batteries – if a bilge pump needs to kick in a boat could sink from a dead battery. Some marinas may also have to turn off power due to high tidal surges that reach the top of docks.

There are many resources for boaters and marinas to use for preparing for a hurricane to avoid damage to boats.

For a straight-forward simple guide, the Firstboat.com Hurricane Guide covers some of the basics in a simple overview for boaters.

BoatUS Hurricane Resource Center has a full website that includes storm tracking and links to downloadable guides for boaters or marinas to prepare for hurricanes. They also offer a free Hurricane Advisory Emails to BoatUS members that includes storm advisories and tracking information. If your boat is impacted by a hurricane, they have a detailed page that gives after the storm hurricane guidance on how to contact boat insurance companies along with some simple maintenance tips for reducing any potential damage.

The American Red Cross disaster and emergency preparedness program, Be Red Cross Ready, has a handy one page Hurricane Safety Checklist that gives essential steps to prepare for a hurricane, emergency supplies needed and what to do after a disaster.