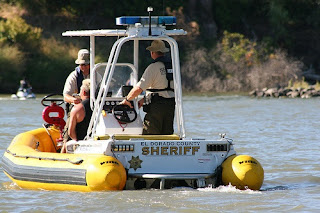 As the big Fourth of July holiday weekend in the U.S. approaches, most boaters are making plans to celebrate on the water with family and friends. Celebrations on the water typically include boat trips to view fireworks, anchorages with multi-boat raft-ups… and lots of good food and drinks.

Unfortunately the Fourth of July weekend fun is also typically marked with reckless behavior by some boaters when it comes to drinking. Boating Under the Influence (BUI) is the cause of more than 17% of boating accidents and fatalities each year, and the Fourth of July Weekend has the most recreational boating fatalities of the year.

Operation Dry Water strives to decrease that number through increased law enforcement and new on-water sobriety tests. Boaters planning to boat and drink should know that there marine officials will be out in force to deter BUI incidents.

Operation Dry Water is designated to take place June 24-26, 2011 and is a national weekend of Boating Under the Influence (BUI) enforcement. Local, state and federal law enforcement from all 50 states and six territories have joined together to raise awareness and enforce drinking and boating laws. The increased enforcement is planned for the weekend before Fourth of July holiday (June 24-26) in an effort to educate boaters prior to one of the biggest boating and drinking weekends on the water.

The multi-agency initiative of Operation Dry Water is now an annual event run by the National Association of State Boating Law Administrators (NASBLA) in partnership with the U.S. Coast Guard to demonstrate zero tolerance for BUI.

Here are a few things that boaters should expect during Operation Dry Water:

Water patrols will be stepped up during the weekend of June 24-26 with an estimated 5,000 local, state and federal law enforcement looking for boaters that are boating under the influence (alcohol or drugs). Although they are looking to detect and arrest BUI offenders, they are also trying to educate boaters on safe boating and drinking practices.

Boaters can expect to be pulled over by marine police even if they are not boating responsibly (or looking like they are boating under the influence of alcohol) – because officials will also be handing out educational information to boaters.

For the first time ever, marine police nationwide will have access to a standardized “Seated Sobriety Test” for marine use to determine if boaters have been drinking in excess while boating. Marine patrol officers will be able to test boaters in a seated position and apply a percentage of probability that they are impaired at .08 blood alcohol concentration (BAC) or higher. A blood alcohol concentration of .08 or higher is against federal and most state laws.

The on-water sobriety test is validated by the same organization that validates DUI tests used on roads, so it enables police officers to make arrests on the water and back-up their arrests in court. A blood alcohol concentration of .08 or higher is against federal and most state laws.

Increased DUI Law Enforcement on Land
Because nearly 80% of recreational boats are trailer boats that arrive and leave waterways by land, many local police officers will be stepping up their patrols during Operation Dry Water weekend as well. The thought is that a boater that drinks while boating (BUI) will leave the water and drive their boat with a trailer becoming a driver under the influence (subject to DUI laws).
For boaters that respect safety on the water, this increased presence of law enforcement shouldn’t be seen as restrictive. Just like drinking and driving, planning your boating and drinking activities responsibly will ensure that you, your boat guests and others on the water are safe during the holiday weekend and year round.
photos courtesy of OperationDryWater.org