Sure, you’ve heard of a shrimp boat, but how about a boat made out of chocolate or wine corks? 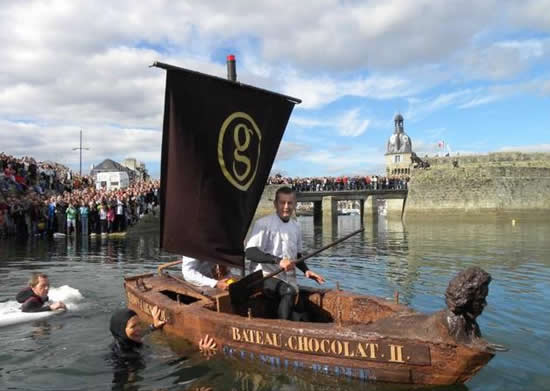 With last month’s news of what may have been the sweetest boat ever built – a recreational vessel made entirely out of chocolate – we started thinking about what other boats have been made out of edible products over the years.

It turns out that there were several boats made out of either food or food and beverage containers over the years. In fact, there were so many that we were able to come up with a top ten list! Amazingly, many of the boats that made our list were on the water within just the past few months.

Brought to you by Boater Life and the Daily Boater.

Although the chocolate boat had a bit of a rocky start, it eventually sailed for over an hour. The chocolatier now intends to create a 12 meter-long yacht made of 6 to 8 tons of chocolate sometime in 2012.

2. Pumpkin Boat
Who would have thought that boat pumpkins are so popular that the “International Pumpkin Boat Championships” recently took place for a second time in Germany?

A tradition that started in the U.S., pumpkin boats and pumpkin boat regattas like the Annual Damariscotta Pumpkinfest and Regatta in Maine can be found almost anywhere… that is anywhere monster pumpkin patches are close to water!

3. Ice Hemp Boat
The BBC science show “Bang Goes the Theory” decided to test a World War II plan to create ships out of ice. Taking three weeks to freeze in an ice warehouse, the ice hemp boat was made of 1,300 gallons of water and hemp frozen into a 20 foot boat shape.

Unfortunately, only an hour after launch the boat took on water and capsized. According to the show, “the theory works, but is unstable”. Hmm, doesn’t seem too reliable in the hot sun either.

4. Milk Carton Boat
Each year the Minneapolis Aquatennial (a ten day festivity on Lake Calhoun) holds a Milk Carton Boat Race where local boat builders design, build and race boats made of milk cartons. The boat must float on only milk cartons with a little help from wood framework. With all that milk, participants must have some really strong bones and teeth!

5. Plastic Bottle Boat
A boat made out of 12,500 recycled plastic bottles (known as Plastiki) sailed for over 130 days in an effort to bring attention to the Great Pacific Garbage Patch – a floating dump of plastic litter as big as the state of Texas. The Plastiki bottle boat completed its mission in mid-July by cruising 8,000 nautical miles from San Francisco to Sydney.

6. Wine Cork Boat
John Pollack, a frustrated Washington speechwriter, traded in his job on Capitol Hill to realize his dream of building and sailing a boat made out of wine corks. Comprised of 165,321 wine corks, the seaworthy, 27 foot wine cork boat made an epic 17 day journey in 2002 down the Douro River in Portugal. Wow, that was a lot of wine!

7. Jute Boat
A natural vegetable fiber known as jute was used to build a boat that was touted as both “unsinkable” and eco-friendly. French sailors set sail for 6 months in February 2010 to promote the natural jute fiber plight of Bangladeshi fisherman. The 27 foot boat was actually made of 40% jute and 60% fiberglass. Although the boat was definitely seaworthy, most boaters probably still prefer 100% fiberglass.

8. Cardboard Box Boat
Take cardboard and combine it with some basic building skills and imagination, and you have the Cape Coral Cardboard Boat Regatta.

Each year in April, businesses, youth organizations and families compete in the team building experience of cardboard boat building and racing. Designs range from canoes to dragon boats to cardboard boat racecars.

9. Juice Container Boat
Inspired by origami, this 12 foot boat made of juice cartons is a wooden cabin with a juice carton hull. The father and son team that sailed the boat down the 4,000 mile Mississippi River calls the juice carton boat eco-friendly because the entire boat can be recycled at the end of the trip.

10. Ice Cream Stick Boat
This 50 foot Viking ship was made of 15 million recycled ice cream sticks and sailed from the Netherlands to London in 2008. The ice-cream stick boat was apparently made from ice-cream enjoyed by about 5,000 very lucky children.

And the Runner-Up that deserves a mention – the Duct Tape Boat – because duct tape can be used for almost anything! Featured in this classic Myth Busters episode on Discovery Channel – the duct tape boat was made of only 23 rolls of duct tape!

This list of food and food container boats proves that almost anything can be seaworthy with a little imagination.