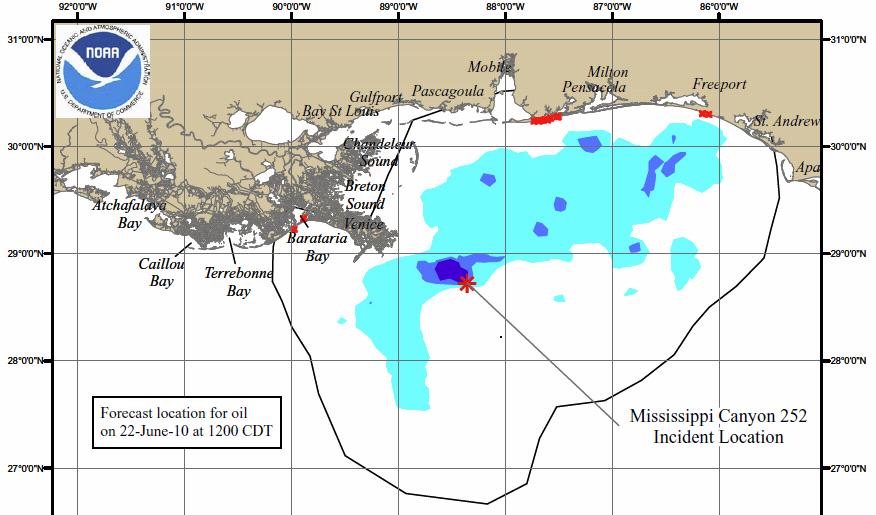 Anyone who loves the water can sympathize with boaters in the Gulf Coast Region. The way of life for boaters has been threatened long-term by the BP Deepwater Horizon oil spill.

For boaters that make a living from the water, the spill has been especially devastating. The Gulf Coast crab, oyster and fishing industry has come to a halt. Charter boats are sitting at the docks. Oyster processing plants are shutting down and laying off workers. Hotels, restaurants and other businesses that rely on tourism have seen a huge drop in business as visitors and vacationers cancel Gulf Coast plans. The survival of the birds, fish, crabs, oysters and wetlands of the Gulf eco-system are in jeopardy.

As I watch the news and continue to see the oil spread throughout the Gulf of Mexico, I cannot help but wonder how far-reaching this environmental disaster will become. Will the oil spread to the entire Florida coastline? Will the loop current take the oil around Florida and head north up the coast? Will the impact to the environment be felt beyond the Gulf Coast?

As of this post date, NOAA is predicting the oil slick will stay out of the loop current. They have a Surface Oil Forecast document that shows the nearshore reach of the oil slick and is updated weekly.

The oil slick coverage area is huge. Which means the entire area is off limits to both commercial and pleasure boaters. Boat that may have come into contact with the oil spill are not allowed into inlets for fear of contaminating clean waters with a boat hull covered in oil.

Of course the BP oil spill is most devastating to commercial boaters, but pleasure boaters are devastated as well. A boat is a huge investment. Not only are pleasure boaters not able to enjoy their boat in the beautiful waters of the Gulf that they love, but they also need to be concerned about damage the oil may cause to boats sitting at docks in contaminated water.

BoatU.S. has put together Oil Spill Resources that give boaters advice on how to protect their boat from potential damage and oil clean up tips. It also offers information on potential engine and outdrive damage due to oil.

Every boater – no matter where you boat – should show concern and support for all Gulf Coast boaters. In my opinion, the environmental and economic impact of this disaster will eventually impact all boaters (and those that love the water) in some way. Maybe the oil slick will spread to shorelines near where you boat. In some cases, fish species that come from Gulf Coast wetlands and migrate up north may die off and no longer be available for fishing. Or it may be as simple as your favorite dock side oyster bar no longer offering fresh oysters. Whether small or large, be prepared for this man-made disaster to impact life on the water.

As a Chesapeake Bay boater I have already seen the consequences of man-made environmental misconduct threaten our way of life on the water. I have seen a dramatic decrease in Maryland blue crabs in the last ten years. Run off from chicken farms and other agricultural pollution has caused a once vibrant oyster and crabbing industry to slowly decline. According to Chesapeake Bay Foundation, there are over 100,000 streams, creeks or rivers that feed into the Chesapeake Bay Watershed. Their Save the Bay efforts are aimed at keeping the Chesapeake Bay waters clean, and they are currently working to pass a Chesapeake Clean Water Act with the government.

The Save the Bay efforts seem to be working. For example, marinas on the Chesapeake Bay take their “clean marina” status very seriously. Last weekend as we fueled up we experienced some small spill-over. The attendants at the gas dock jumped to it and cleaned up the spill very quickly and thoroughly. They covered the water with absorbing cloths and sprays and they were sure to get every last drop.

But officials recognize that they are ill-prepared for any kind of large oil spill in the Chesapeake Bay. And although it is unlikely that the bay will see drilling like the BP Horizon, there is always the threat of an oil tanker accident. Also, 90% of the blue crab population utilizes ocean waters off the mouth of the Chesapeake Bay early in their lifecycle. Oil spills from the BP oil spill or any other drilling could further jeopardize the delicate eco-system of the bay.

Watching that clean marina’s quick response at the gas dock made me think about the clean-up efforts in the Gulf. It must be incredibly frustrating to not be able to “quickly clean up the oil” and helplessly watch your pristine waterways become so severely contaminated. If you are not in the gulf, it makes you stop and think how you personally would deal with the situation.

Boaters boat because of their love for the water. Whether they are commercial fisherman or pleasure boating, they all have a common respect and love of the water.

Let’s hope the impact of the BP oil spill is contained quickly and is not as far-reaching as some predict. Let’s hope that as boaters in other regions the biggest impact we feel is the impact of empathy for our fellow boaters dealing with this terrible environmental catastrophe.